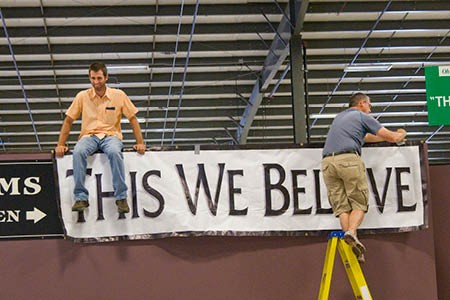 We Believe Christ is our Saviour

Basic Beliefs
You may think of Mennonites as “the folks who came into town and helped clean up after the flood or tornado that devastated the community.”

That is one view of Mennonites ...
… Another, of course – if you’ve ever visited one of the Pennsylvania Dutch or Amish tourist attractions in Pennsylvania, Ohio, Indiana and elsewhere – is that Mennonites are a reclusive group of sectarians who wear bonnets and still use horse-drawn wagons and farm equipment.

Here are some facts:
Mennonites have been around for almost 500 years. Early leaders rejected the grip of church-state control over individuals’ lives. Their ideas and insistence on separation between church and state are equally important today in an era of terrorism and a governmental response that tends to suppress the rights of individuals and nonconformist communities.

Some Old Order Mennonites and Amish still attempt to live simply, “off the grid,” in farming communities and without the benefit of electrical power and automobiles. But most Mennonites don’t live this way. We are pretty ordinary folks. You’ll find vibrant and growing Mennonite congregations everywhere, from small towns and cities to nearly every major urban center in North America. New York City alone is home to more than 20 Mennonite congregations.

Mennonites believe in the centrality and inspiration of the Bible and in Jesus Christ as the One sent by God to bring reconciliation between the Creator and a broken world. We value both our Protestant and Catholic origins and we try to emphasize the connections between faith, words and actions. We believe baptism and church membership should be voluntary. We also emphasize community, peace and love, helping others and being a diverse and multi-cultural church.

Mennonites believe peace building is an achievable way of life. Because God is loving and just, Mennonites feel called to live lives that reflect this reality. We believe that peace and wholeness is a real possibility in time and space. It’s how God intends us to live here and now, and we have been given all of the necessary tools to achieve this through our faith in Jesus Christ. Living as peace builders when war comes is not easy because many in our society believe it is foolish to refuse to defend oneself and one’s country in the face of aggression.

Walking the talk.
Mennonites have become increasingly recognized as leaders in the art of conflict resolution – even on an international scale. Mennonites have been involved in helping differing groups or factions talk to each other in places like East Africa, Northern Ireland and Central America. Mennonites were also involved in some of the early developments in offender-victim reconciliation organizations in Canada and the United States, and the promotion of restorative justice as a way of responding to criminal and antisocial activity. One of the biggest challenges for Mennonites is speaking out about what we’ve learned along the way. Many are calling for Mennonites to speak more boldly – to talk the walk.

Mennonites recognize the value of “organized religion.” Throughout history, religious faith has helped people understand the meaning of life and helped to bring some cohesive social order. At times the lines between church and state have become blurred and the church has also been part of oppressive movements, suppression of individuals’ rights and even wars. In fact, many feel that religion is the greatest cause of war. This is a familiar issue for Mennonites. However, as part of North American society, we also recognize the need to be organized as a group of Christian believers. We try to be most concerned with trusting in the leading of God’s Spirit in a way that reflects the life and teaching of Jesus . Inside each of us there is a yearning to understand why we are here. Mennonites believe the answer lies in both believing in and following Jesus.

Mennonites are a global people.
In North America and Europe, the majority of Mennonites are white, suburban and middle class – but that’s rapidly changing. Mennonite Church USA is still comprised of many small-community congregations located mostly in the East and Midwest, but we are increasingly multicultural and scattered from Miami to Los Angeles. Nearly 20 percent of Mennonites in the United States are Hispanic, African- American or Asian. The largest and fastest-growing Mennonite church in the U.S. is an African-American congregation in Hampton, Va. In the global Mennonite family, which numbers nearly 1.2 million, people of color now comprise the majority of members.

We believe our emphasis on community is a positive response to the indifference of modern culture. In an era of mass marketing, uncontrolled consumerism, loneliness, and growing violence, we are working to create a sense of community for ourselves and our neighbors. You are welcome to join us. We are not a closed group. We believe that the best response to cynicism, doubt and isolation is to invite both friends and strangers to share the burdens and joys of life together – in Christ’s new community.